An impact factor is a way of measuring the relative ranking of a journal within a particular field. Ranked lists of journals can be used to:

The SJR Cites/Doc. (2 years) is essentially the same as the long-established Journal Impact Factor (Thomson Reuters) provided in the ISI Web of Science.

The Eigenfactor™ Score uses a network of citation data to assess the relative importance of journals in the science and social science communities. Journals with many citations from influential journals are rated as influential themselves.

The Article Influence™ Score determines the average influence of a journal's articles.

Score calculation is based on the citations received over a five year period, but it also considers which journals have contributed these citations so that highly cited journals will influence the network more than lesser cited journals. References from one article in a journal to another article from the same journal are removed, so that Eigenfactor Scores are not influenced by journal self-citation.

Since the number and frequency of citations vary by discipline, the Eigenfactor algorithm adjusts for these differences. 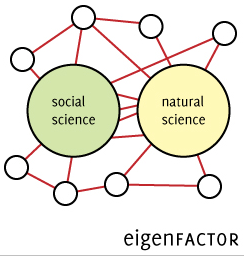 In addition to articles from scholarly journals, Eigenfactor also includes newspaper articles, theses, popular magazines and other items in its reference material.

SCImago Journal Rank (SJR) is a "bibliometric indicator that measures the prestige or influence of a scientific journal article, calculated with the largest and most nearly complete bibliographic database, and using a citation window of 3 years that is wide enough to include most of the citations, and dynamic enough to measure the evolution of scientific journals" (Gonzalez-Pereira, Guerrero-Bote, Moya-Anegon, 2009). The SJR is similar to the Eigenfactor Score, but rather than using information from ISI Web of Science, it is based on journals published since 1995 that are contained in Scopus.

Please note: The SJR Cites/Doc. (2 years) is essentially the same as the long-established Journal Impact Factor (Thomson Reuters) provided in ISI Web of Science. SCImago enables journals in an SJR category to be "ordered" (ranked) by Cites/Doc (2 years), a useful measure, given its equivalent relationship to the Thomson Reuter Journal Impact Factor.

The SCImago Journal Rank website allows you to rank, analyze, and compare journals. For example, here are the 2012 journal rankings for Health, Toxicology and Mutagenesis within the Environmental Science subject area: